Enjoy the cool weather with a sweet, refreshing Apple Pie Sangria that encompasses the flavors and smells of Autumn. 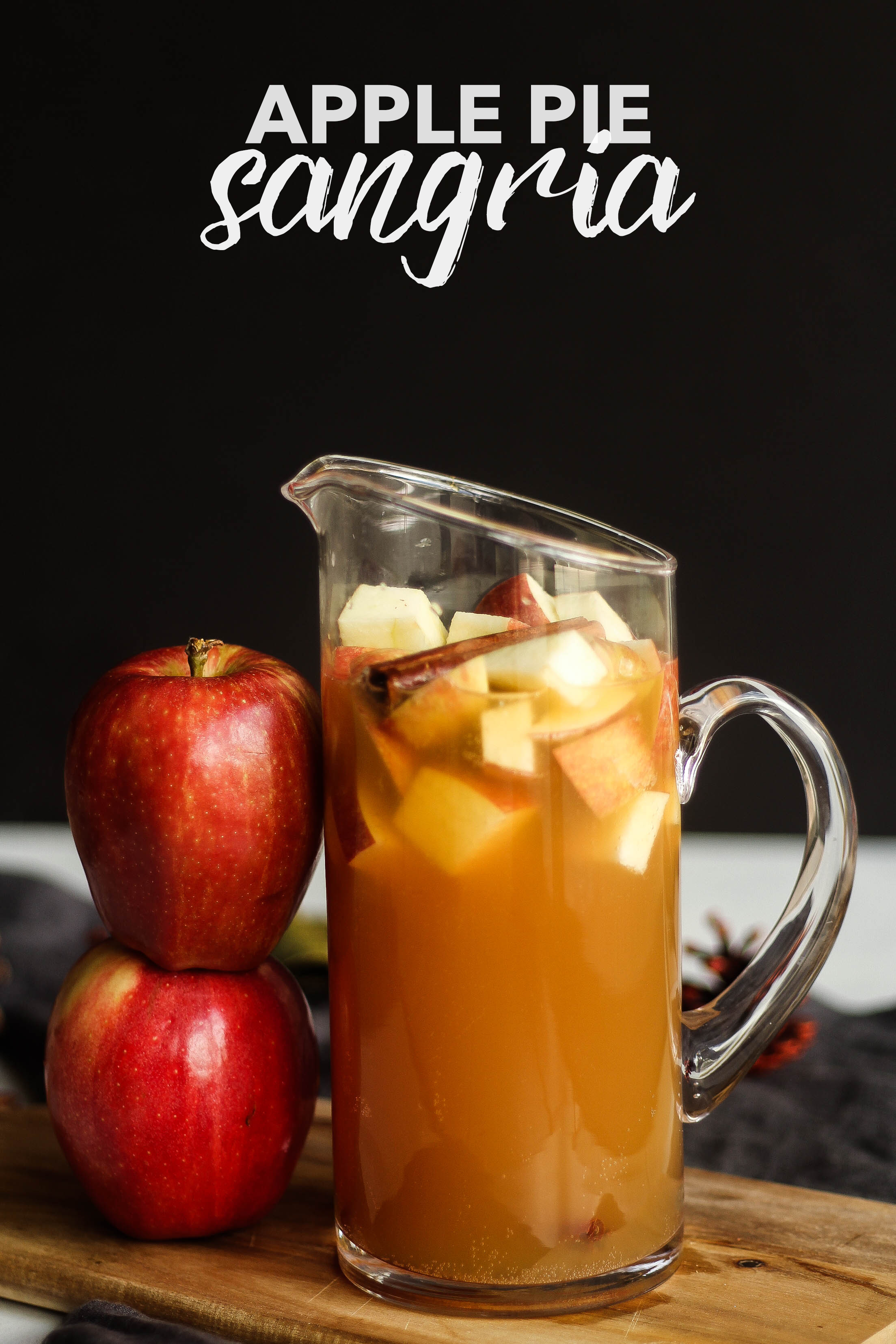 I am smiling from ear to ear to be sharing my first recipe of October this year! If I haven’t expressed this enough… I love Fall.

And funny enough, I just got back from experiencing Summer.

This past Summer was the busiest of my life with my eCookbook, a lot going on with my day job, new freelance partnerships, and preparing for my vacation. Because I would be totally and completely unavailable during my cruise this past week, I had to do some major preparation. With all of that being said, I honestly didn’t get to “enjoy” my Summer as much as usual. To me, enjoying Summer means taking advantage of the sunny weather here in Florida, going to the beach, jumping in the pool, going out with friends, etc.

So while I feel like I just woke up and it was Fall, it’s pretty ironic that I was able to experience Summer on a cruise just as Fall begins. It was like my last hoorah of Summer! 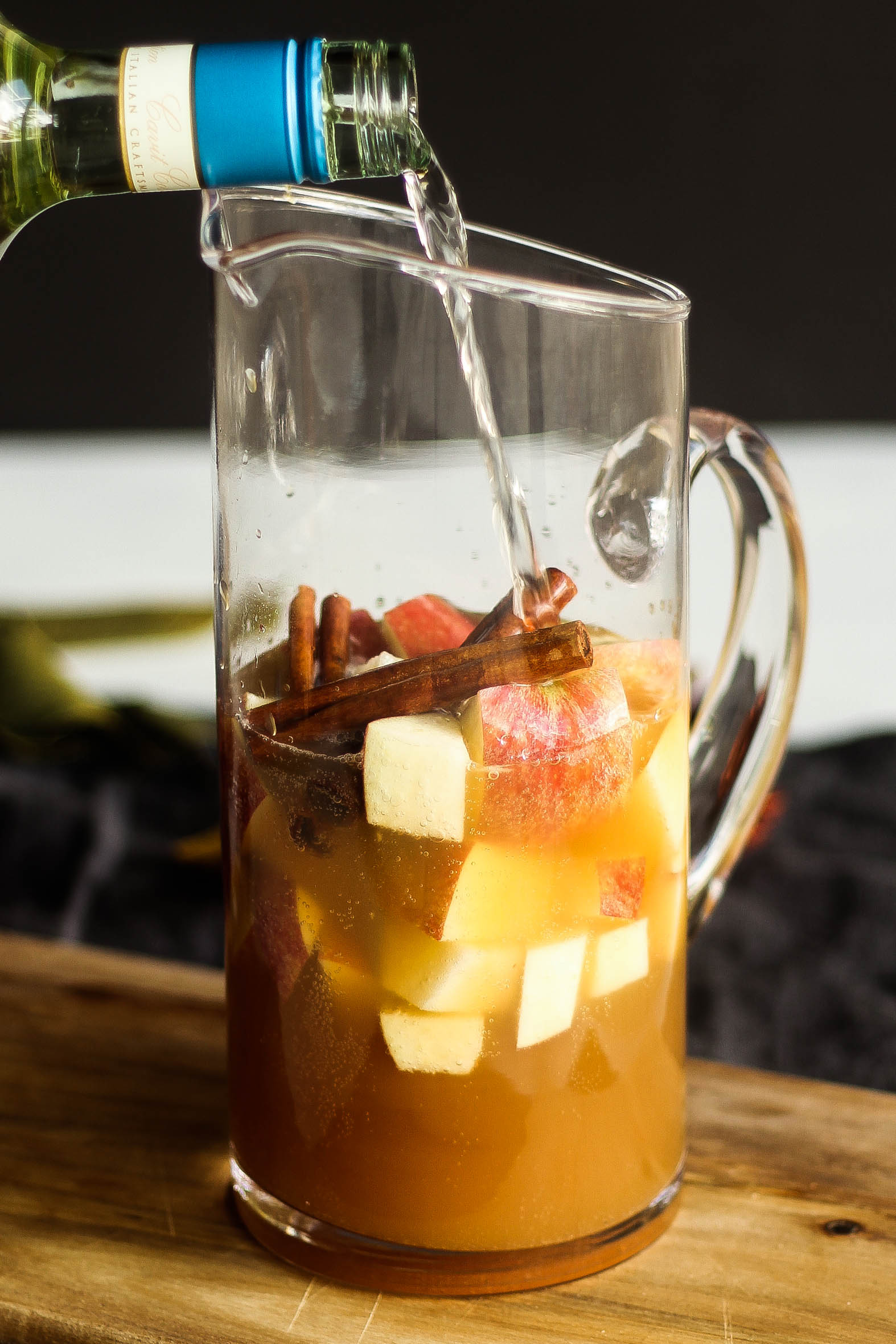 So, now that I’ve gotten it out of my system, I’m ready for Fall. Just kidding, I was ready for Fall back in June, but you know what I mean. This Apple Pie Sangria is the absolute PERFECT drink of Fall. Actually, I would go so far as to say it is the drink of Fall. The official drink of Fall. Yep. Officially. So, if you’re feeling sad that Summer is over, I suggest you drink this. It’s basically a magic potion that will make you excited for Fall.

So, what does October look like for you? October brings back memories, for me, of living in Memphis when we had actual changing seasons (instead of Florida where it’s a sauna even in October). The leaves of the trees in our yard were STUNNING. I’m talking bright orange, red, and yellow. I wish I had photos to show you; I loved living in Tennessee as a child.

My parents would always decorate our house for holidays, inside and out. For October/November, they would decorate the outside with Fall-themed decor. My dad had made this giant scarecrow (that wasn’t creepy) and he would sit on a bale of hay in the front yard. In Memphis, the front and back yards of our neighborhood were ginormous, so scarecrow dude had a lot of room. And yeah, now that I’m writing this, the scarecrow sounds creepy, but I promise, it was cute!

Anybody out there looking for a DIY on scarecrow-making, let me ask my dad and get back to you. 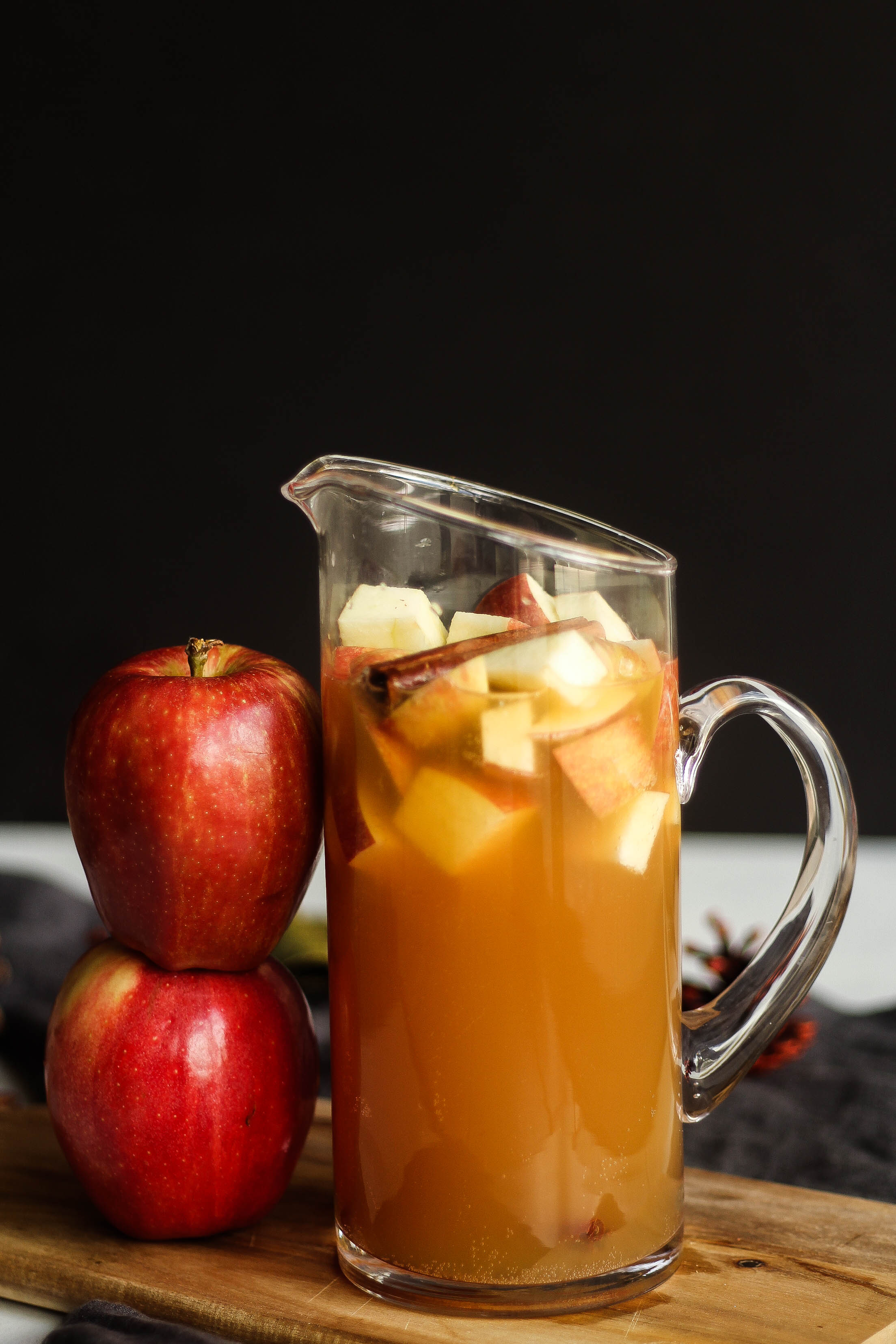 I have fun memories of trick-or-treating in our neighborhood – the neighborhood we lived in was full of families with young children me and my sister’s age, and my parents had made a ton of friends there. We were such a tight knit group of friends, and we did so many fun things together! Trick-or-treating was always the best. Especially because my sister and I had the best costumes. And by best I mean I am cracking up at age 24 looking back at what we would dress up as. For instance, one year I was a pumpkin and my sister was an m&m. What can I say, we like food. 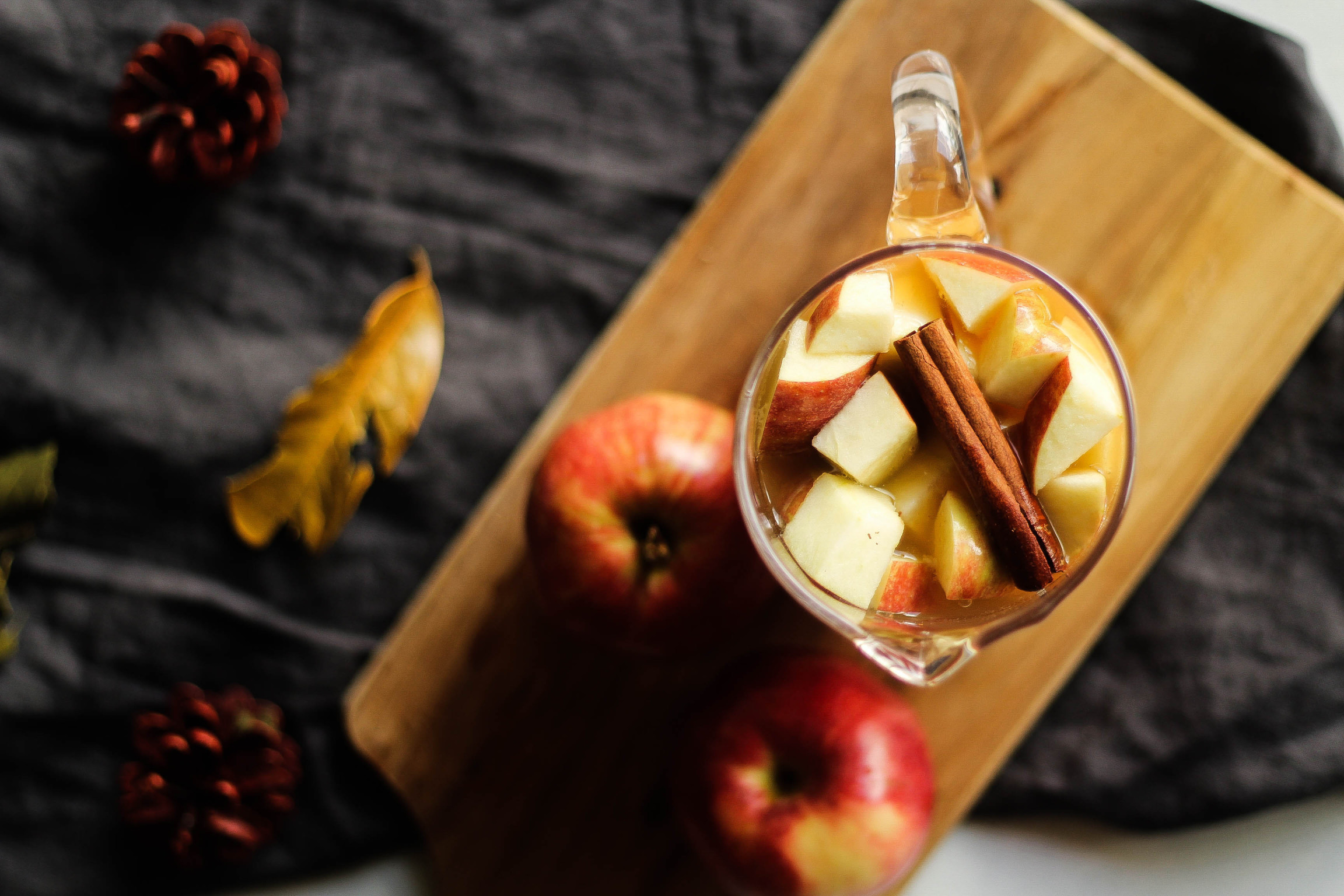 Unfortunately, I wasn’t drinking sangria back then because, I was seven. But now, I can! *woot*

Clearly, I have a thing for sangria… because I basically have a recipe for almost every season: 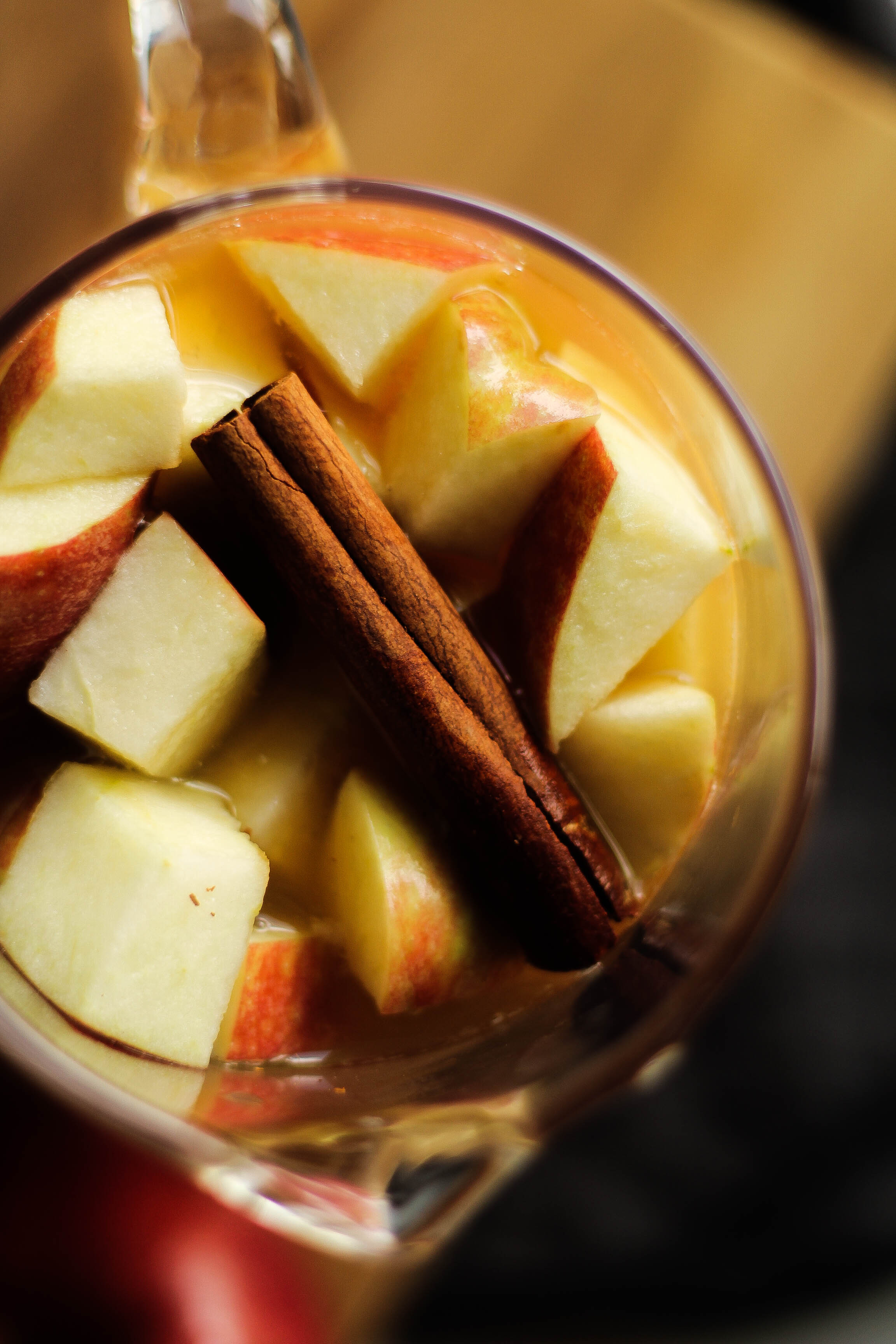 This sangria is SO simple, you guys. I urge you to make a giant batch and bring it to a party. I promise, your friends will dub you a sangria master, while not knowing how easy it was to throw together.

Additionally, many of the traditional apple sangrias call for some sort of vodka, which I omitted. BUT, if you are looking to strengthen your sangria (holla), I recommend adding about a cup of ginger, caramel, or vanilla vodka! 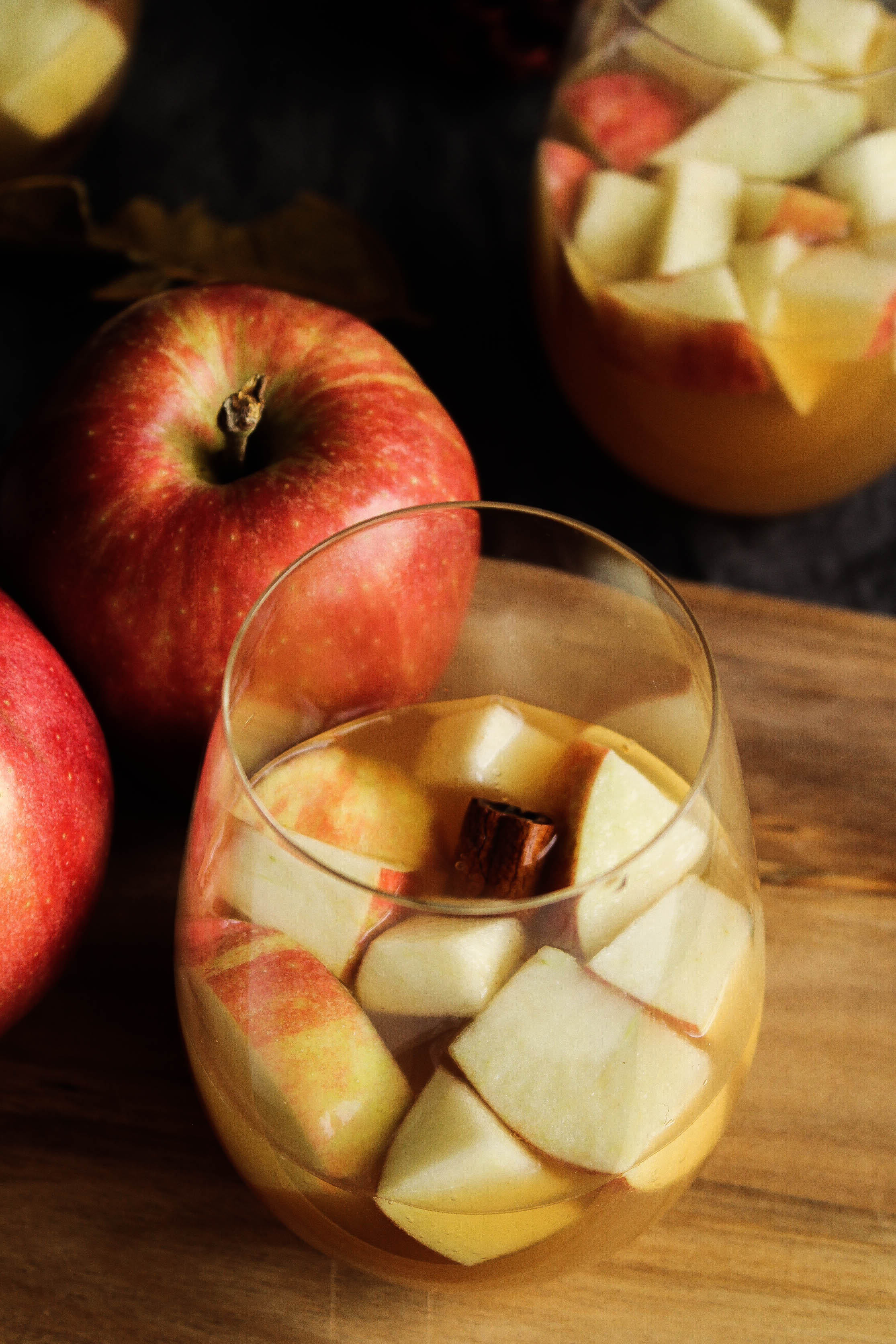 Join the conversation:
What does October remind you of?
What is your favorite Fall cocktail? 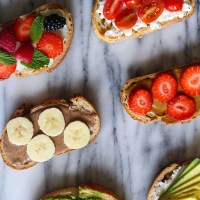